I had some Al Fresco Mango Chipotle Chicken Sausages and I wanted to make a pizza using them. I asked around and one friend from a cooking forum suggested I use caramelized onions with tomato sauce. I am so glad I took her suggestion! We normally have pizza night on Friday night, but this weekend it didn’t work that way. We weren’t home for dinner any weekend night but Sunday so that is when we had our pizza. I liked the pizza myself, and would make it again. Grumpy said it was edible (sometimes I think he has no sense 0f adventure with his food. He would be happy with meat and potatoes every night!). I am betting if either of my sons were here THEY would have loved it! The sausages gave it a little bit of a kick and that added with the sweetness of the caramelized onions was perfect in my opinion. I guess I will take Grumpy’s opinion and toss it out the back door! he he.
Pizza Crust:

Mix 1 cup of flour, yeast, salt, and sugar. Stir in hot tap water until well blended. Stir in additional cup of flour. Dough will become stiff. Turn out onto floured board and knead with remaining flour (you may use more or less flour – depending on the “stickyness” of your dough). After set aside dough after it has been kneaded, drizzle a small amount of olive oil in your mixing bowl (I usually wash the mixing bowl out before I do this step). Place dough in mixing bowl and turn to coat with the olive oil. Set aside in a warm spot until dough has doubled in size. 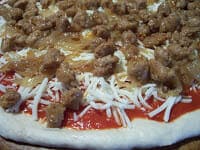 Peel and dice the onions. It’s important to have all the onion pieces roughly the same size and shape so they cook evenly. Otherwise, smaller pieces will burn before the larger ones caramelize. Heat the pan over medium heat, then add the oil and continue to heat.

Once the oil is nice and hot, add the onions. They should sizzle when they hit the oil, but the oil shouldn’t be so hot that they splatter and pop.

Stir them together immediately so each onion piece is coated with some of the oil. The temperature of the oil will drop.

Now let the onions cook, stirring up off the bottom frequently, so each onion piece gets roughly the same amount of time in contact with the floor of the pan.

Keep stirring from time to time, perhaps every 15 to 30 seconds. The onions will lose as much as two-thirds of their volume as the water within them evaporates, and then they’ll begin to brown.

Once browning begins, you may wish to lower the heat; then you run a much lower risk of burning the onions. Either way, watch them closely at this point and stir more frequently. As the sugar within them caramelizes, they’ll go from light tan to golden to deep brown. Don’t cook past a mahogany color, because they’re at great danger of burning about now. This is when I added some red cooking wine for flavor and let the wine cook off.
When the desired color is reached (after at least 10 to 20 minutes), transfer the onions to a cool plate or bowl at once so they stop cooking.
Prepping the sausage:
I took 3 al fresco Mango Chipotle Chicken Sausages, removed the casing and diced it up in small bite sized pieces. I then pre-cooked them in the same pan I caramelized the onions in and set aside until my crust was ready. 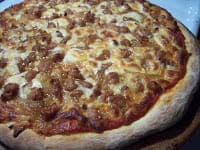 I spread my crust out on my Pampered Chef pizza stone and put a layer of Rinaldi traditional pizza sauce. This sauce has a slightly sweet flavor and I thought it would be perfect on the pizza! I then spread out an 8 oz. package of part-skim Mozzarella cheese on top of the sauce, scattered the caramelized onions on top of the cheese and then loaded it with the cooked sausage bits. I baked this on the lowest rack of my oven for 15 minutes and another 10 minutes on the middle rack to brown the cheese a little. I think I would cut the middle rack baking down to 5 minutes as the crust was a little darker than I wanted it to be. 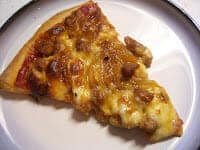 Finally, my slice of the pie. There are two slices left and I’m having one for lunch today and the other for lunch tomorrow! 🙂 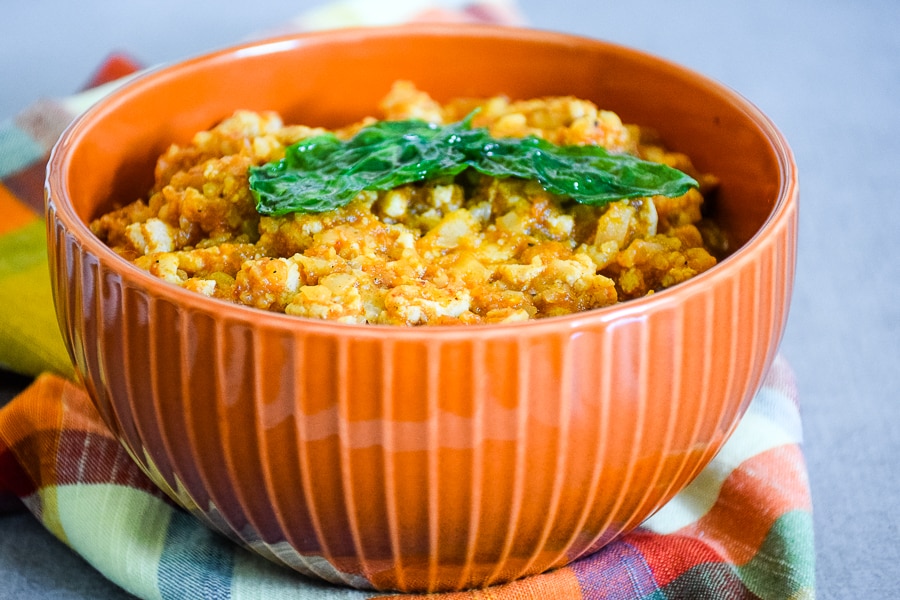 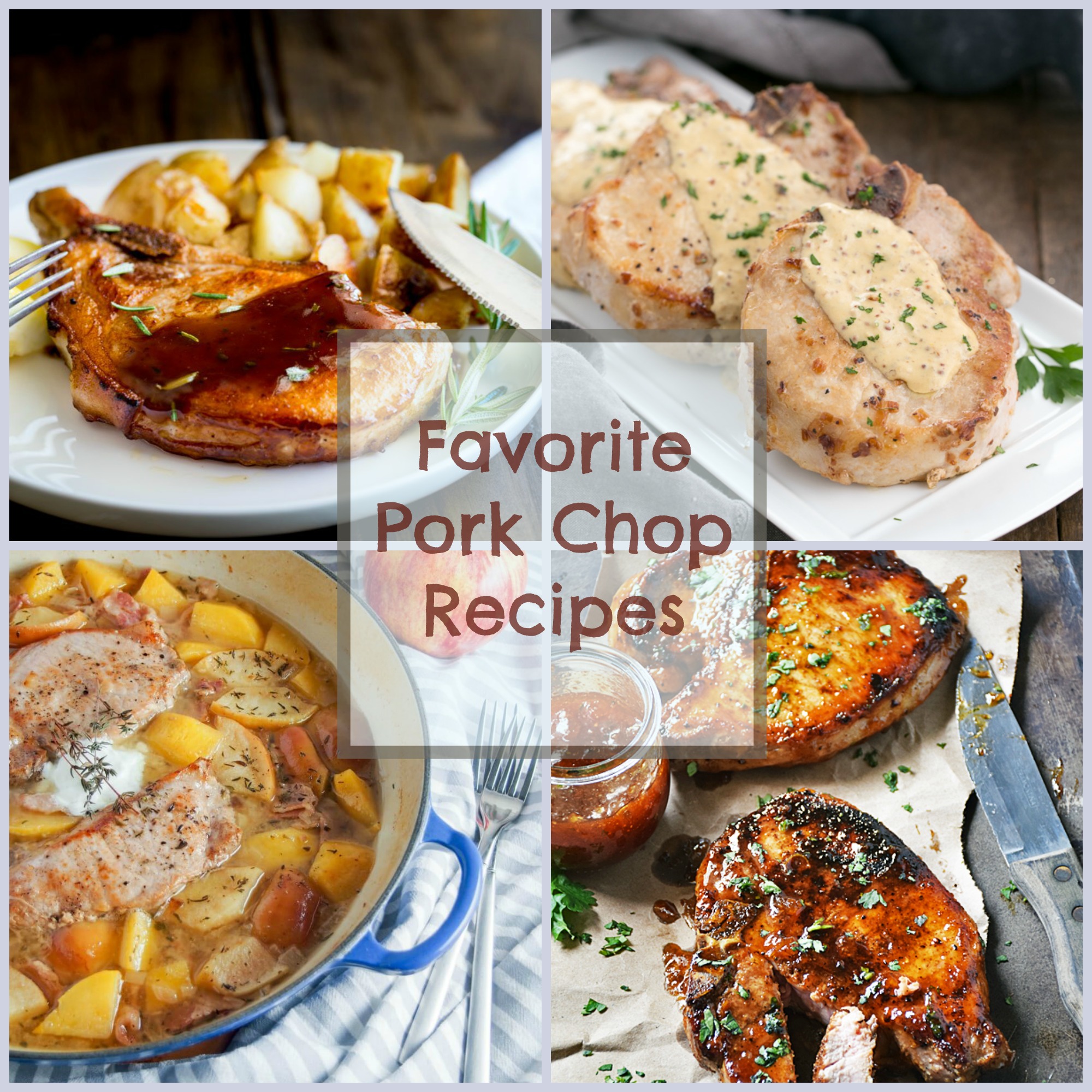 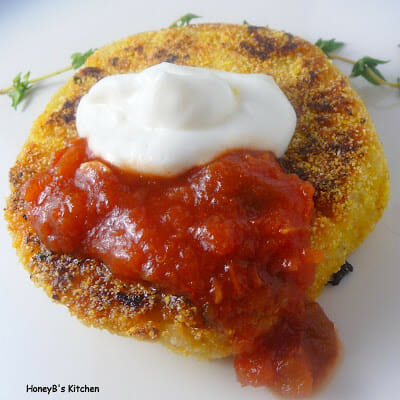