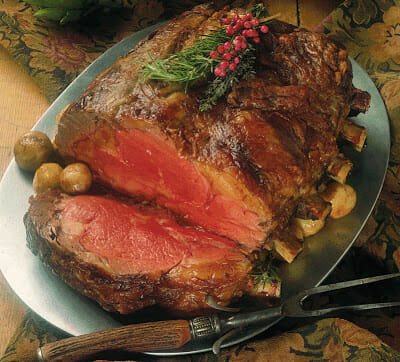 9shares
Jump to Recipe
Today my guest, Jane, of The Heritage Cook is sharing with you a recipe for a Holiday Prime Rib Roast with Pan Gravy. She also has included several sauce recipes along with a Yorkshire pudding recipe.  Prime Rib Roast is perfect for those Holiday family dinner. It is not only delicious but gorgeous on the table! 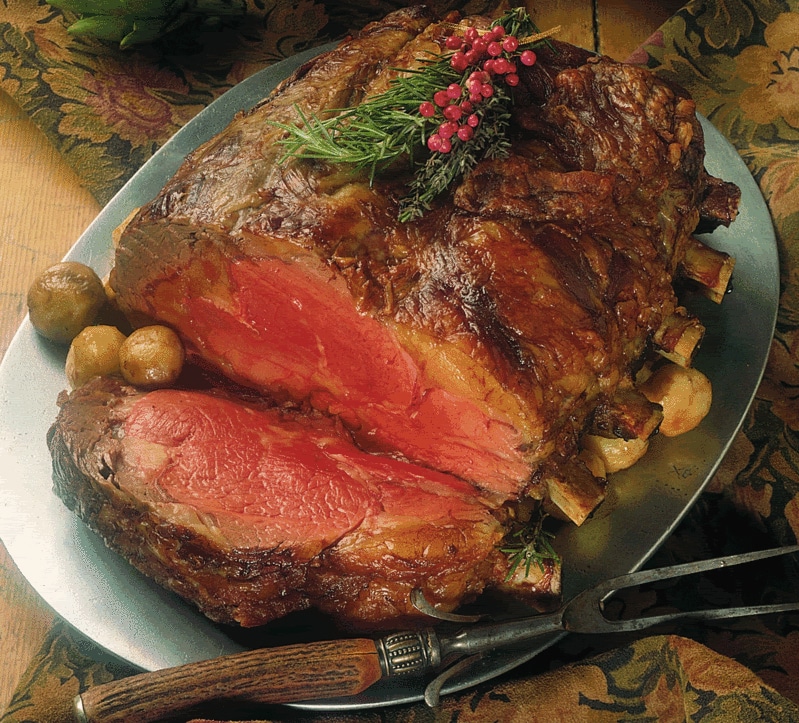 It is always an honor to write a guest post for another blogger that I admire and today is no exception. Shelby of Grumpy’s HoneyBunch is extremely talented, funny and generous. While she is basking in the Caribbean sun, I am happy to present you with one of my favorite holiday meals, Prime Rib!
When I think of serving a special occasion meal, in particular, one during the holidays, Prime Rib is at the top of my list. It is elegant, easy to make and doesn’t require a lot of work or last minute preparations.

Every year my father-in-law roasts a large beef rib roast for the family Christmas dinner. When we walk in the house we are instantly enveloped with the mouth-watering aromas of roasting beef. Yum! 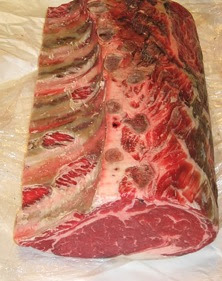 A standing rib roast may seem hard to make, but it is probably the easiest of all the party entrees to make. It can be as simple as seasoning the roast with salt and pepper or you can go all out and make a complicated rub and crust. I like something in between, with all the flavor but not all the work. The only equipment you need is a roasting pan and an instant-read thermometer. There is no need for a rack because you stand the beef on the ribs raising it off the pan and allowing the heat to reach all sides at the same time.

When you buy the roast, have your butcher cut the bones off and tie them back on. This is called “cradling.” This gives you the flavor of roasting the meat on the bone without the hassle when you go to carve it. Just don’t forget to remove the strings before you serve it!

The trick to perfectly cooked roasts is to cook them below your desired final temperature and let the residual or carry-over heat finish cooking it. While resting, the juices have a chance to be redistributed throughout the roast, keeping it juicy. Transfer it from the roasting pan to your cutting board and cover loosely with foil. And don’t worry about it cooling off – it will easily stay warm for the 15 to 30 minutes it will rest.

Yorkshire pudding is a cross between a baked roll and custard with a crunchy exterior and creamy interior. Cooked in the drippings from the roast, it is a savory pastry designed to absorb the juices from the plate, so place it next to the beef for maximum flavor. Often made in individual portions, I like Tyler Florence’s version cooked like a Dutch Baby (large pancake). 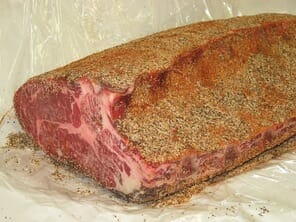 Sauces for your Prime Rib Roast

Horseradish sauce is one of the traditional accompaniments for roasted beef. The pungent, spicy flavor is addicting and helps cut some of the richness of the beef. Horseradish is a member of the mustard family and the version we are all accustomed to seeing is made from the thick, white root. The longer it sits in the refrigerator, the milder it gets, so for the fullest flavor, buy a new jar before the holidays.

I have included two recipes for slightly different versions of a horseradish sauce. The first is made with whipping cream and the second with sour cream. Make the one that suits your personal tastes. If you like sour cream on your baked potatoes, try this version – it will wake up your taste buds!

Bearnaise sauce, a variation on Hollandaise that is artery-clogging but oh so good. It is hollandaise with shallots and tarragon. It was my father’s favorite sauce with beef and the one he always requested for his birthday. Today’s recipe utilizes a blender, which makes this a snap to make. Definitely, worth the effort, this sauce is likely to become one of your favorites, just like my dad. 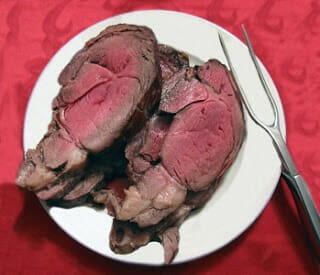 The holidays can be stressful, but if you plan ahead and do a little at a time, you can cruise through the season. I hope that today’s recipes help to make these holidays extra special!

Prime Rib Roast with Pan Gravy, including two horseradish sauce recipes along with a Yorkshire pudding.

For the Simple Dry Rub

For the Yorkshire Pudding

For the Horseradish Cream Sauce

For the Sour Cream Horseradish Sauce, From What’s Cooking America

To Make the Simple Dry Rub

Combine all ingredients in a medium bowl until evenly distributed. Store in a tightly sealed container at room temperature.

To Make the Roast

Remove roast from the refrigerator, loosely wrapped, 3 hours before cooking. Roasts should always be brought close to room temperature first, before they go in the oven. (This helps them cook more evenly.)

Cookbooks often call for the excess fat to be removed. By "excess" fat they mean any fat more than an inch thick. The fat is what provides the flavor and what you are paying for with prime rib, so you want to leave it on. Your butcher should have removed any excess fat.

If your butcher hasn't already done so, cut the bones away from the roast and tie them back on to the roast with kitchen string. This will make it much easier to carve the roast, while still allowing you to stand the roast on the rib bones while cooking.

Preheat your oven to 500°F, or the highest it will go (our oven only goes up to 450°F). Generously sprinkle salt and pepper all over the roast. Alternately, you can replace the salt and pepper with a dry rub (such as the one below) of your choice.

Insert a meat thermometer into the thickest part of the roast, making sure it doesn't touch a bone. (Some meat thermometers require that you poke a hole first with a skewer, and then insert the thermometer.) Place the roast, fat side up, rib side down in a roasting pan in the oven.

After 15 minutes on 500°F, reduce the heat to 325°F. To figure out the total cooking time, allow about 13 to 15 minutes per pound for rare and 15 to 17 minutes per pound for medium rare. The actual cooking time will depend on the shape of the roast and your particular oven. A flatter roast will cook more quickly than a thicker one. So make sure to use a meat thermometer. This is not a roast to "wing it". Err on the rare side.

Once the roast has reached the desired internal temperature, remove it from oven and let rest 20 minutes, covered with aluminum foil, before carving. The roast will continue to cook while it is resting.

With a knife or scissors, cut the strings, which attach the meat to the bones. Remove the bones (save for making stock for soup. Then, using a sharp carving knife, slice meat across the grain for serving, making the slices about 1/4 to 1/2 inch thick.

To make the Yorkshire Pudding

Sift together the flour and salt in a bowl. In another bowl, beat together the eggs and milk until light and foamy. Stir in the dry ingredients just until incorporated.

To make the Horseradish Cream Sauce

Beat the heavy cream until stiff. Slowly add the horseradish and lemon juice and continue to beat together. Taste and adjust seasoning if needed. Garnish top with chives. Serve with roasted beef.

In a medium bowl, combine all the ingredients and whisk until smooth. Taste and adjust seasonings. Cover and refrigerate until ready to use. Will hold in the refrigerator up to 2 days.

To make the Bernaise Sauce

﻿Simmer the shallots in vinegar and white wine until liquid has been reduced by about two-thirds. Remove from heat and cool.

Place this mixture in blender and add egg yolks, tarragon, peppercorns, salt, and dry mustard. Blend at high speed for no more than 10 seconds.

Add the warm melted butter, cayenne, and a squeeze of lemon juice (optional). Quickly turn on blender again and let it rotate until sauce thickens. Should it become too thick, add a bit of hot water and blend again.

This sauce should be made at the last minute so that it will be warm when served (but it may be kept warm in a double boiler). 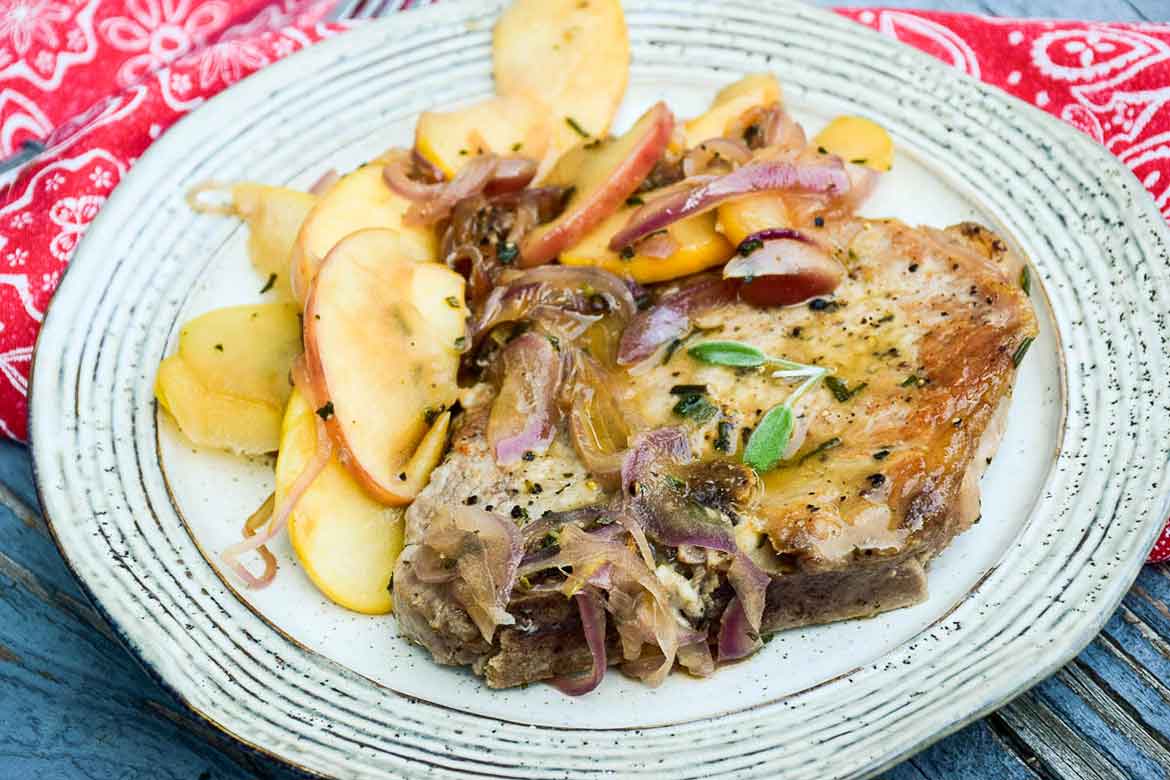 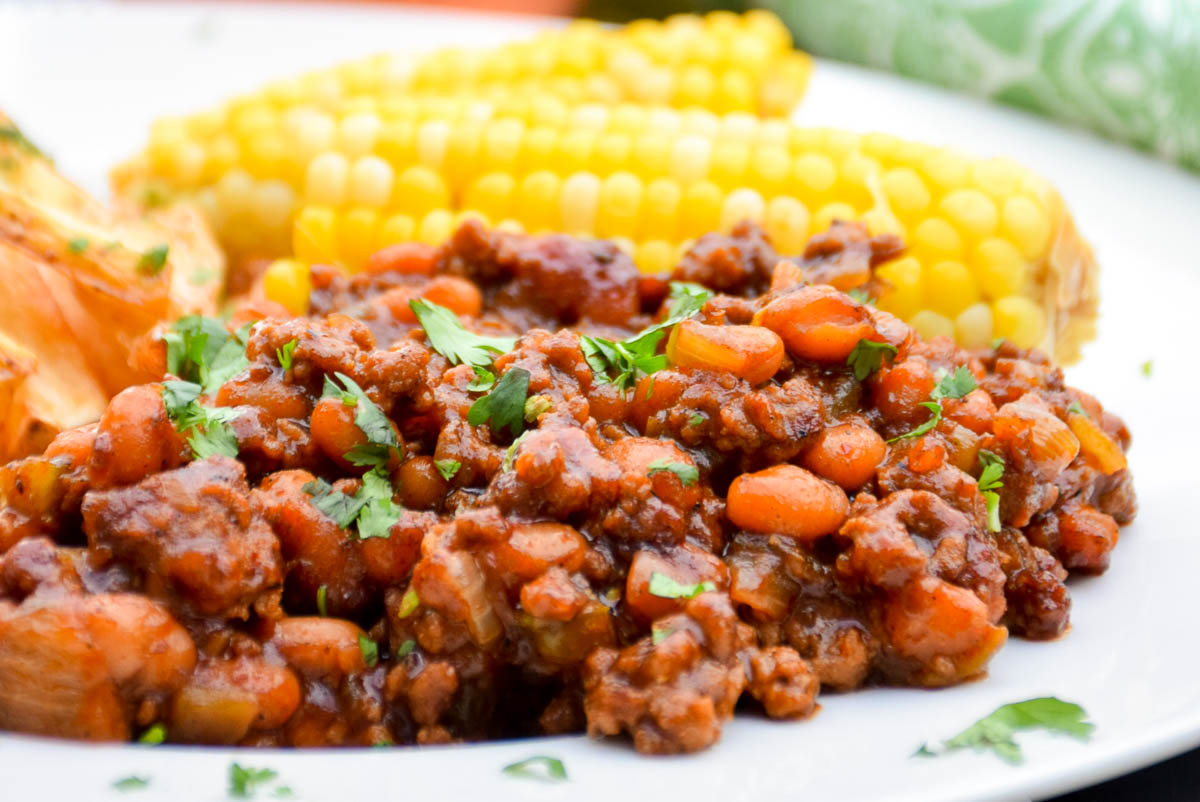